Did you ever wonder what it would be like to be on Noah’s ark? You can read about it in Genesis 6-9. Picture books sometimes make the ark look like fun, but it wasn’t fun. Living on the ark took a lot of work and a lot of patience. While we don’t know exactly what Noah and his family thought and did, here’s what it might have been like if Noah had kept a diary.

Day 1—Rain
We boarded the ark a week ago, as God told us to, and today the rain began. It’s as if the heavens have opened up! The sky is dark, and it’s dark inside the ark. The animals are terrified of the thunder and lightning. We trust God to keep us safe, but we’ve never seen a storm like this before.

Day 3
Even though we knew a flood was coming, actually seeing it happen is scary. Water is churning and swirling around the ark, washing away everything—and everyone—in its path. Sometimes we just can’t look.

Day 7
The rain is still beating down on us. Since it started, it hasn’t stopped, even for a minute. The water has risen so high that the ark is floating. The waves are huge! The animals are seasick, and we humans are too. Now we know what “sick as a dog” means. I hope we get used to the rocking of the ark soon. We all feel awful.

Day 10
It’s still raining. But we’re all feeling better, which is a good thing because it’s a LOT of work to care for all these animals. Here are some of the chores we do every day:

Day 22
Drat those mice! They gnawed their way out of their cage and got into our grain supply. They’re eating themselves sick, and we need that grain for the other animals—not to mention for making our own bread. My son Shem is rigging up a trap to catch them without hurting them—he’s handy that way. Outside, it’s still raining. We can’t even see the mountaintops now. It’s a scary feeling to see only water everywhere we look.

Day 25
Still raining. The chimpanzees had a fight, so we’re practicing our bandaging skills on them.

Day 27
Rain, rain, rain. Seems like our clothes never completely dry out, and our hands are all pruney. It sure would be great to be back home with a good bed, no rain, and the animals living outside. We’re trying not to complain, because we know God chose us for this important task. But it would be nice to be dry.

Day 28
More rain. Mice out again. Am tempted to build them a tiny ark of their own and send them off. Why on earth did God make mice in the first place?

Day 30
It’s been one month since the rain began, and it’s still raining. Today we were talking about all the things we miss. We miss walking on grass, feeling the sunshine on our faces, and eating fresh fruits and vegetables. Most of all, we miss our family and friends. We wish they had believed God when he said the flood was coming. We wish we could have convinced them to come on board the ark with us. Sometimes we wonder if we’ll ever get out of here, but we know God is with us, and we’re thankful that we have each other.

Day 36
Still raining. But good news: the female elephant was pregnant when she came on board, and last night her calf was born! I woke everyone up in the middle of the night to watch. It’s like a miracle. It’s always good to see new life on this boat. (The mice had babies today too—not good.)

Day 41
We can hardly believe it—we woke up this morning to find that THE RAIN HAS STOPPED! After raining for 40 days and 40 nights, the rain is done! It’s so much quieter without the constant pounding of rain, and the animals are calmer too. But now we have to do a very hard thing. We have to wait. We’ll wait for the water to go down and for God to show us what to do next. That might take a long time, but we’ll try to be patient. We know God has a plan! 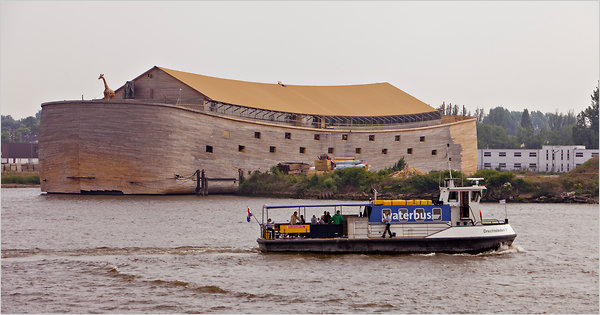 A Dutch man named Johan Huiber has spent the past four years building a full-size model of Noah’s ark. He’s using the measurements in the Bible. This ark is almost 500 feet long (150 meters) and 80 feet wide (25 meters). That’s as long as two and a half hockey rinks, or almost one and a half football fields! It’s in a harbor near the city of Dordrecht, The Netherlands, and it’s almost finished. When it’s done, it will be able to sail all over the world so people can see what living in Noah’s ark might have been like. Maybe you’ll get to see it someday!

View this article as it appeared in the print version.