Christian Reformed Church members from across Canada met for a virtual conversation Saturday, Sept. 24, almost completely undeterred by Hurricane Fiona that had hit Atlantic Canada just the day before. The storm washed away homes and knocked out power to hundreds of thousands of people, but only one delegate was unable to attend because of the power failure and another from Classis Eastern Canada managed to connect by driving to a nearby airport where there was cell reception. In all, 77 people took part, including 16 Canada Corporation board members and eight staff of CRC ministries. The Canada Corporation is the board of directors that serves the CRC in Canada. It called the meeting earlier this summer in order to promote better connection between the board and the congregations and classes (regional groups of churches) it serves.

Three things were on the agenda:

Synod is the general assembly of the CRCNA, a gathering of delegates from all the regional assemblies across the U.S. and Canada. In between meetings of synod, the Council of Delegates,  composed of a delegate from each classis and some at-large members, acts on synod’s behalf. Those Council members serve their respective country’s incorporated bodies—the CRCNA Canada Corporation and Michigan Corporation (U.S. corporations are incorporated by state).

Andy deRuyter, chair of the Council and president of the Canada Corporation, presented the structure update. “We’re in a good place; better than ever before,” he said “(but) there’s still a lot of good work that needs to be done.” He spoke of excitement seeing such cooperation work. A very visible part of the structure change is in the denomination's top leadership. Synod appointed Zachary King as general secretary, a role that serves the whole denomination as a kind of ecclesiastical officer. “I consider myself to be a shepherd of the CRC,” King told the gathered Canadians. He also focused on partnership and said his goal was to serve the churches well. King’s office, which includes a chief administrative officer (not yet appointed), reports directly to synod and has two-way relationships with the other denominational entities, including the church’s U.S. and Canadian corporations, which relate to each other through joint ministry agreements. 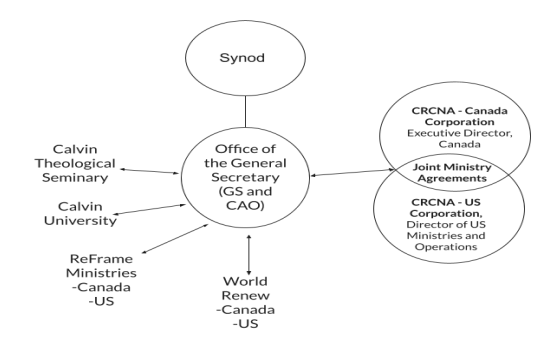 The CRCNA’s denominational structure with the Office of General Secretary (Acts of Synod 2022, p. 928)

Al Postma, transitional executive director for the CRC in Canada, provided an update from the Canada office. Postma sees his role as supporting the rebuilding of trust and trustworthiness, creating a healthy binationality, and setting the foundation to prepare for what’s next. He reported that those in key denominational leadership positions are working well together. However, he voiced one concern. “There is a recognition as I connect with people across the Christian Reformed Church in Canada,” he said, “that there is a sense of exhaustion—from dealing with COVID, restructuring matters, and/or (recent) decisions of Synod.

“It gets tiring being tired,” Postma continued, “but I (also) sense across the denomination a real desire to be able to step forward into ministry in effective life-giving ways. God continues to do his work within the CRC, and I’ve had a chance to see some of that flourish and grow in the last few years as well as hopeful signs of possibilities into the future. That’s not to negate the exhaustion or challenges, but just to hold those in tension and balance.”

“Exhaustion is real,” affirmed Cecil VanNiejenhuis, a representative from Classis Alberta North and former co-director of Pastor Church Resources. Noting examples of what he has witnessed in churches and in pastors, he wondered if the level of exhaustion is precluding helpful navigation of the implications of decisions made at Synod 2022. “Do we really have energy for the HSR (human sexuality report), too?” he asked.

That part of the meeting—discussions led by Challenging Conversations-trained facilitators focused on the decisions of Synod 2022 regarding the human sexuality report—was not in plenary session but small group break-out sessions. Questions included in the agenda were “What did you think when you heard about Synod’s decisions? How is your church affected? What’s been the hardest thing for you?” and “What does your church need to move forward in this next season?” Groups were encouraged to share some written responses, anonymously if they chose, with the Canada corporation board. The board said it will release a summary of the responses at a later date.

A follow-up meeting is being planned for Jan. 28.