The Council of Delegates of the Christian Reformed Church met in person Oct. 12-14 with an agenda that included the reorganization of the denomination’s congregational ministries, new synodical and staff appointments, the process for Council members to file an exception to the Council's Statement of Agreement, an evaluation of the Inspire 2022 conference, and the consolidation of Raise Up Global Ministries with Resonate Global Mission.

The Council serves synod, the broadest assembly of the denomination, in between meetings of synod. It includes one delegate from each of 49 classes (regional assemblies) of the CRC, plus up to 10 at-large members. Additionally, the delegates form distinct corporation boards, one U.S. and one Canadian, for legal corporate governance and decision-making in their respective countries. The U.S. corporation and CRCNA Canada Corporation act in accordance with country-specific legislation for not-for-profit entities.

Nine separate ministries serving CRC congregations recently were merged into one agency to be known as Congregational Ministries. Despite previous communication that director positions have been eliminated, Chris Schoon, director of Faith Formation and soon to be the U.S. co-director of the new agency, clarified that. He told the Council that the word “director” has been removed from their job titles. Those who were directors of those agencies are now team leaders working together across the agency to share resources, while each still is concentrating on his or her own area. The new agency will be led by two co-leaders, one from the U.S., one from Canada. (See “Congregational Ministries Merge into One Agency with Two Co-Leaders.”)

Requesting an Exception Regarding Synod’s Decisions

Council of Delegate members signify their agreement with the teachings of the Christian Reformed Church’s creeds and confessions by signing the Council’s Statement of Agreement, similar to the way officebearers in a local church sign the Covenant for Officebearers.

But following Synod 2022’s decisions regarding human sexuality, particularly in affirming the  confessional status of the church’s traditional understanding of marriage, some Council members have been seeking a process to file an exception, indicating their difficulty with that decision. (See “Requesting an Exception to Synod 2022’s Human Sexuality Decisions.”)

The Council endorsed the consolidation of Timothy Leadership Training, Educational Care, and Global Coffee Break (currently under the umbrella of Raise Up Global Ministries) into Resonate Global Mission, the CRC’s mission agency. That process is expected to be completed by Jan. 1, 2023.

The three ministries, which merged into Raise Up in 2017, are all programs that develop specific-purpose adult education materials in a variety of languages to serve the global church. (See “Consolidating Raise Up Global Ministries with Resonate Global Mission.”)

Rather than move ahead with plans for Inspire 2024, the Council decided instead to ask staff to study the feasibility of holding it due to low attendance and high costs for Inspire 2022.

The Council asked staff to bring the feasibility report to its February 2023 meeting. (See “To Inspire or Not Inspire in 2024.”)

Now that the denomination has completed its first budget cycle using a pledge system to collect ministry shares (the money contributed by member congregations to be used for joint ministries), Synod 2022 asked the Council to get feedback on how it is working. The Council started with its own members, spending time in small groups at the October meeting to discuss the churches’ responses toward making pledges and if the new approach for collecting ministry shares is working as intended. Questions were also sent out to classes (regional groups of churches) to get their feedback.

For ministry share giving to go well,
pastors and deacons have to promote it.
—Jonathan Kim, Classis Ko-Am

Some Council members shared their views after the small groups finished. Jonathan Kim, Classis Ko-Am, said that for ministry share giving to go well, pastors and deacons have to promote it. “What’s not working is sending out pieces of paper from the denominations about ministries,” he said. “When I can show what PCR (Pastor Church Resources) has done for continuing education, people give. We need personal connection to the ministry so we have a good reason to give.”

Amy Nydam, Classis Alberta North, said engaging with stories and just clarifying the difference between Resonate, World Renew, and ReFrame helps. “Video resources are so helpful. They spark imagination,” she said. “Could February be ‘ministry shares month’? How can we be creative about engaging people?”

Arie Vander Zouwen, Classis North Cascades, told delegates one of the things he likes best about the Council is hearing about the wonderful work happening. “We have to take it back to our churches. We need to get in front of our people and sell,” he said. “Put a video in front of us every week.”

No More Vetting of Charities?

Also related to finance, the Council is recommending to Synod 2023 that synod discontinue its practice of evaluating nondenominational charitable organizations and creating a list recommending them to local churches for support.

It noted that there was little evidence that the list is used and the vetting of charities requires significant time and attention of finance staff when there is already information about charitable organizations available online.

Greta Luimes, Canada at-large delegate, said a classis could endorse agencies, since there is a more local connection.

Kelli Berkner, also Canada at-large delegate, said that in her work with deacons in the U.S. and Canada, she found that some churches do no vetting. “This concerns me. Could there at least be some resources for deacons about how to vet?” she asked.

William Koopmans, Classis Hamilton, noted that when organizations go on the list, the organization can be promoted to churches because there is a trust factor with deacons. “This report says this is a tremendous drain on staff time but suggests that deacons can do it,” he pointed out. “Seems more stewardly that staff do it once than multiple deacons doing it.”

But Melissa Van Dyk, Canada at-large delegate, agreed the list should be discontinued. “There are hard decisions to be made when we read that our staff are overworked.” 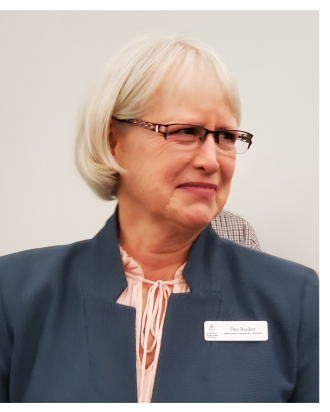 The U.S. Corporation of the Council appointed Shirley DeVries as director of administrative operations-U.S. She previously served as director of information technology in the U.S. Those responsibilities are still part of her new position.